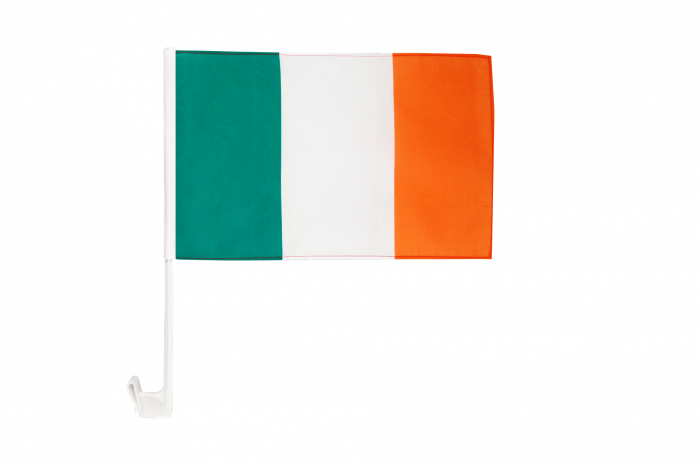 Skip to the beginning of the images gallery
€9.95
plus flat rate shipping
incl. VAT
In stock
Delivery time 1 - 5 workdays
SKU: 1792

Our Ireland car flags are made of tear proof polyester.

All car flags are pulled up a plastic bar and equipped with a holder for mounting the flag on the car window. The total length is approx. 42 cm.

for clamping at the side window,
new and in original packaging.

If you want to buy the Ireland car flag, please click on the green shopping cart button!

Not authorized according to traffic regulations – Usage at own risk.

The Irish Republic refers to the tradition of the French national flag with its vertical tricolour. It was a long way for Ireland until the official recognition on the 29th of December in 1937.

The Irish were first granted permission by the British for a proper flag as a symbol for the country in 1782. The St. Patrick's Cross functioned as the first Irish flag, but became part of the British flag, the Union Jack, due to the Act of Union in 1800. Different Irish flags followed, among them the harp as a national coat of arms, but the first Irish tricolour did not appear until 1848.

While the colours and their order are symbols for the nation's virtues in many other countries, the Irish renounce such meanings. However, an unofficial interpretation claim that the green stands for the island and the catholic population, the orange for the protestant part of the country and the white for peace between the two confessions.