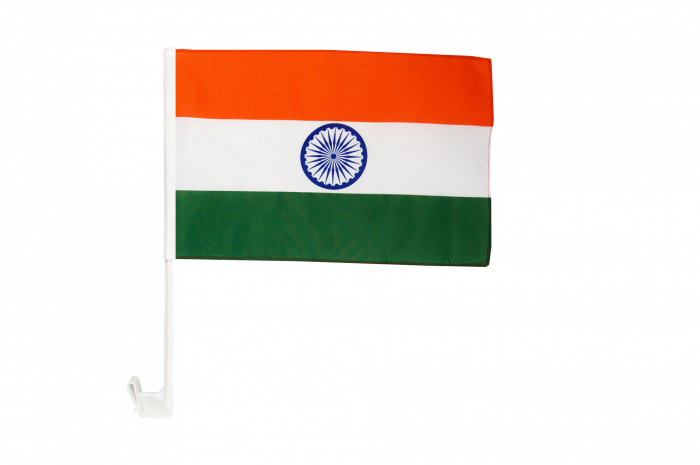 Skip to the beginning of the images gallery
€9.95
plus flat rate shipping
incl. VAT
In stock
Delivery time 1 - 5 workdays
SKU: 1835

Our India car flags are made of tear proof polyester.

All car flags are pulled up a plastic bar and equipped with a holder for mounting the flag on the car window. The total length is approx. 42 cm.

for clamping at the side window,
new and in original packaging.

If you want to buy the India car flag, please click on the green shopping cart button!

Not authorized according to traffic regulations – Usage at own risk.

India's flag was officially introduced on the 22nd of July in 1947, around three weeks after the official Indian independence from Great Britain.

The Indian horizontal tricolour consists of the colours saffron, white and green with a blue wheel in the centre. The Irish flag probably served as a model, especially the white bar in the middle which is supposed to act as a peace buffer between two religious communities. Additionally, Ireland also achieved independence from the United Kingdom. The theory is supported by the fact that a disciple with Irish roots of Swami Vivekananda, one of the most important Hindu monks of the time, had the first idea for an Indian national flag in the beginning of the 20th century.

In Hindi, India's official language, the Indian flag is also called Tiranga, meaning nothing other than tricolour. It was designed by Pingali Venkayya, an Indian freedom fighter and geologist, and takes bearing on the inoffical flag of the Indian congress of 1921. This was composed of the colours red, white and green and in a simple spinning wheel (charka) was depicted in the middle.

The current Indian flag, which was introduced officially in 1947, leads saffron as the uppermost colour, as it stands for renunciation and distance from material values. The white bar symbolizes light and the path to truth. The green part underneath represents the connection between humans, earth and life. The charka in the centre was exchanged for a dharmachakra, which is the wheel of law of the dharma. The Dharma is a Buddhist and Hindu term which is comparable to law, custom, morality and ethics.

However, the chakra is not only a symbol of virtuousness, but also of progress, dynamics and peaceful change. In the new version of the Indian flag, every reference to religion was omitted, probably in order to avoid misinterpretations or provocations after the religiously motivated, violent separation of Cambodia from India (mostly Muslims live in Cambodia, whereas the majority of Indians are Hindus). The Indian flag is permitted for private use only since 2002, but always needs to be treated with dignity, loyalty and respect.