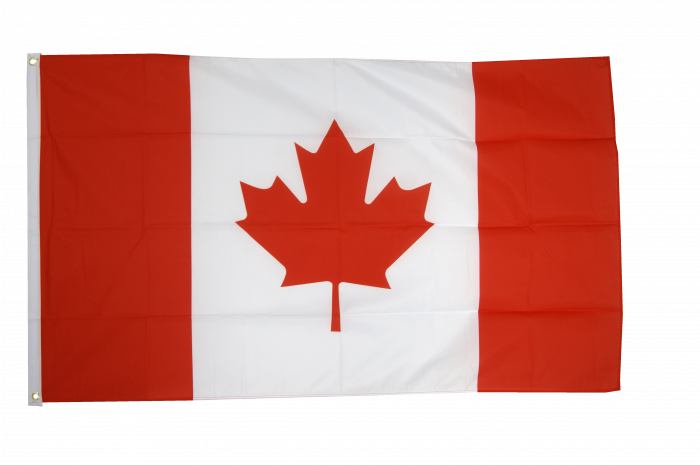 Skip to the beginning of the images gallery
As low as €7.95
plus flat rate shipping
incl. VAT
In stock
Delivery time 1 - 5 workdays
SKU: mcom_flag_kanada

Our Canada flags are made of tear proof polyester. The edges of the Canada have a double lining and at the flagpole side a strong flag band is sewed in.

The flag is equipped with two metal eyelets on the flagpole for raising the flag.

Further details of the flag:

New and in original packaging.

If you want to buy the Canada flag, please click on the green shopping cart button!

Best-buy-flags - Your flags and banners specialist.

The Canadian flag has different names due to the bilingual population of the North-American country. In the English-speaking part, it is called Maple Leaf Flag, whereas it is named “l'unifolié” in the French-speaking part.

Until the official adoption on the 15th February in 1965, different variations of the British Red Ensign with the Canadian coat of arms served as Canada's national flag. While different nations let symbolic values determine their flags, the fact that the maple leaf on the Canadian flag only has 11 corners instead of 23, as it is usual in nature, does not have a special meaning. Different versions were tested in a wind tunnel and the flag with an 11-cornered Maple Leave corresponded the most to aesthetic demands.

The Maple Leaf itself, however, has deep roots in the Canadian traditions. It already established itself as a symbol for the Canadian nature and environment in the beginning of the 18th century. The further colours of the flag originate in the time when Canada was still a French and respectively English colony. The white colour comes from the French royal colour and the red refers to the St Georges Cross, which still adorns the English flag.